A review by Geetha Iyer

Karl Taro Greenfeld’s collection of stories, NowTrends, documents the escape routes of twelve diverse protagonists, many of whom find themselves lucklessly deposited back where they started. This is not to suggest that the stories go nowhere; indeed, each tale is marked by an almost breathless exploration of place. The characters globetrot from the United States to Japan, China to France, Amsterdam, Nepal, Indonesia, sometimes within the space of a single story. The strongest stories in the collection even leap back in time, exploring the destruction or establishment of identity in Japan during the Second World War. However, the underlying tension within each story is the hanging doubt, often understated, that life is an ellipse, not an arc; the characters do not overcome adversity but rather revisit it, often.

This theme is explored in tragicomic detail in “Mistakes were Made, Errors Happened.” The young, unnamed protagonist flies from California to Tokyo in search of his identity. He goes broke. In his hunt for cash he follows the suggestions of: a “diabolically brilliant” partner in crime who gets him fired; a “sexy koala bear” callgirl who puts a hit on him; and a “kind of fat” English teacher and sometimes-model who breaks up with him. He spirals in ever-tightening circles around the drain hole of failure. He reflects upon his life, finds himself stuck, somewhere here: “____________________I__________________.”

Meanwhile, in “The Gymnast,” Greenfeld takes the ellipse to novelistic heights, following the rise and fall of Xiao, a young Chinese Olympic hopeful. Her coaches orchestrate physical and technical perfection, her peers covet it, and her mother—in fervent hope of Olympic glory—urges her daughter to “listen to [her] coaches” as they artificially suspend her adolescence to boost her performance. Xiao is resourceful, but the challenges she faces are monumental; her eventual escape from the trap of ambition comes at a wrenching cost. 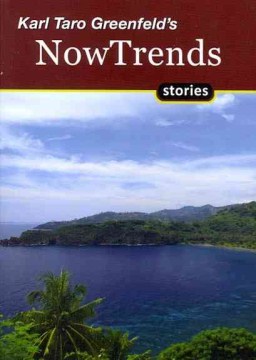 In other stories, the protagonists are naïve or apathetic about adulthood. In “Amsterdam,” the narrator, Karl—who shares the same first name and occupation as the author—is listless even after selling his first book, and passes time high on drugs and wondering how long his money will last. In “Copper Top,” an older Karl—who again may or may not be Greenfeld himself—is haunted by his anxieties, which include hypochondria, paranoia, and lack of self-confidence. In these auto-fictional stories, Greenfeld uses humor to highlight the tragedy of a certain kind of contemporary existence—that a comfortable life may feel impoverished if one’s self-worth is as vaporous as mist.

NowTrends traces unrequited love and failed ambition, and in the sharpest stories, Greenfeld pairs his protagonists with richly developed foils to heighten the contrast between loss and gain. In “Silver,” the American boss of a company in Hong Kong gradually roots for the happiness of the eponymous leader of the company’s football team. In “Client” the reader and narrator share their contempt for the boorish Japanese mountaineer who is the first blind man to climb Mount Everest. And in the title story, “NowTrends,” a mild-mannered Chinese celebrity journalist crosses paths with a documentary film-making friend from university, now imprisoned by the government.

The protagonists in NowTrends seem to orbit tragedy, and their lives are ironic, bittersweet. “Mickey Mouse,” the second-to-last story in the collection, is therefore a stand-out. Ohta is a struggling artist commissioned to boost morale by designing a replacement for Mickey Mouse, an “enemy” of the Japanese Empire during wartime. To reveal more would rob the story of a richly satisfying moment, well-earned after Greenfeld’s meticulous documentation of misadventures in the other stories.

There are two kinds of journeys, the ones where you escape your origins and the ones where you return to where you started. Karl Taro Greenfeld’s NowTrends tantalizes with one kind of journey, then subverts conventional expectations of what will eventually happen. His protagonists are caught in culture clashes, coming-of-age uncertainties, and identity crises; they give us something to think about as we contemplate our own escapes from the formidable and the mundane.

Geetha Iyer is an MFA candidate for creative writing and environment at Iowa State University.